Designed by a rising star on Philly’s architectural scene in 1903, this informal colonial has it all and executes everything beautifully.

Sign up for our weekly home and property newsletter, featuring homes for sale, neighborhood happenings, and more. 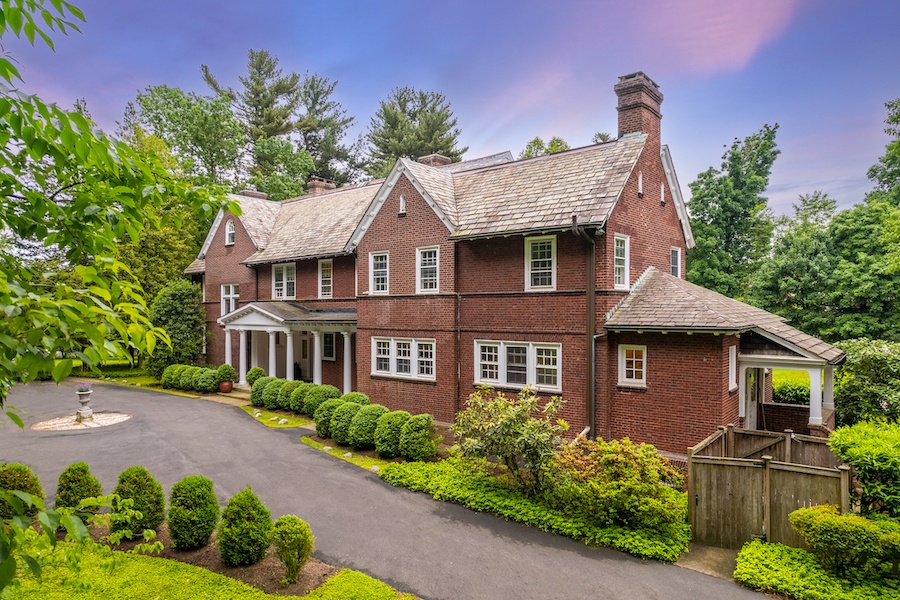 They still make ’em like they used to, but even in 1903, when Arthur Brockie designed this house at 437 W. Chestnut Hill Ave., Philadelphia, PA 19118, architects were taking all sorts of modern liberties with the traditional colonial house — to great effect. | Interior photos and photo of terrace: Linda McManus Images; all other exterior photos: WeFilmPhilly; all photos via The Sivel Group, BHHS Fox & Roach Realtors

Those of you who are fans of the popular architectural-trash-talk website McMansion Hell have by now no doubt memorized the basic principles that make good houses good and bad ones awful. (And for those of you who aren’t or haven’t, I recommend McMansions 101 on that site as a crash course.)

The Elements of Architectural Style as explained there include Balance, Proportion, and Rhythm. And just as these come in classical and jazz forms in music, they do the same in architecture.

The colonial or Georgian house in its pure form represents the height of classical balance, proportion and rhythm. Its perfectly symmetrical arrangement of interior spaces and exterior decoration gives it a dignity found in only a few other house styles.

But sometimes, colonial houses let their hair down and jazz things up a little. They shuffle the arrangement of interior elements, vary the exterior massing, and syncopate the whole ensemble to create houses that are no less balanced or proportional but more visually interesting — and maybe even more flexible on the inside. 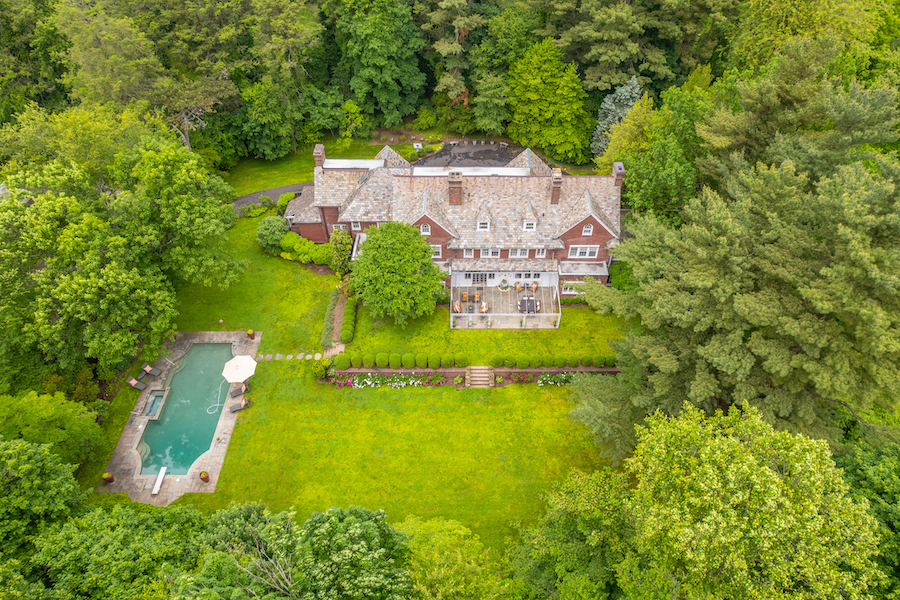 And that brings us to today’s featured house. This Chestnut Hill informal colonial house for sale is the work of an architect who cut his teeth at one of Philadelphia’s most prestigious architectural firms but, somewhere along the way, learned how to channel the spirit of one of the early modern masters.

That architect is Arthur H. Brockie (1875-1946), who designed this house for financier John Andrew Harris in 1903. Harris called it “Highwinds” at first, but by 1911, it had been renamed “Highlands,” the name that would stick (save for a period when it was called “Dunwoodie” by a later owner).

Brockie, who went on to design a number of houses and other buildings in Chestnut Hill and beyond, started out as a draftsman in the office of Cope & Stewardson, Philadelphia’s most prestigious architectural firm at the time. He took a leave from the firm to serve in the Spanish-American War in 1898, and upon return, he won a scholarship that allowed him to study in Europe. In 1901, after returning from Europe, he launched his own architectural firm, taking on T. Mitchell Hastings in 1904 to form a partnership that would last until 1919.

This house is Brockie’s first from-the-ground-up design. In style, there’s nothing Furnessian at all about this house, but in its arrangement of spaces, wings and projecting extensions, Brockie’s house displays the same exuberance and informality that made Frank Furness one of the country’s first modern architects some decades before modernism became a Thing. 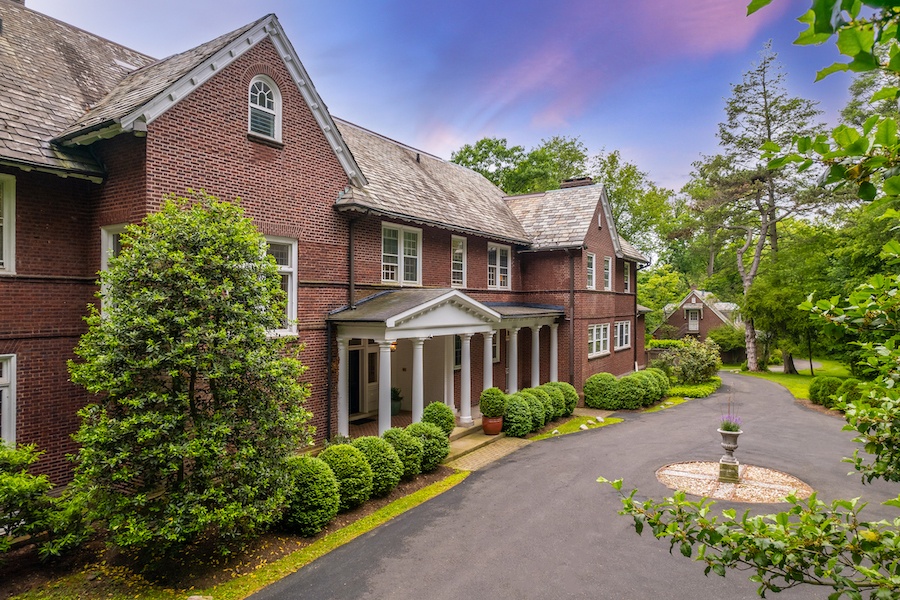 That much should be clear just from looking at the house’s front elevation. Note how the entrance portico is not located in the exact center of the house? How the gabled section to its left recedes into the house while the one on the right projects out from it? How the windows on the second floor are not perfectly aligned with those on the floor below? And there’s a window missing from the far end of the wing on the right. 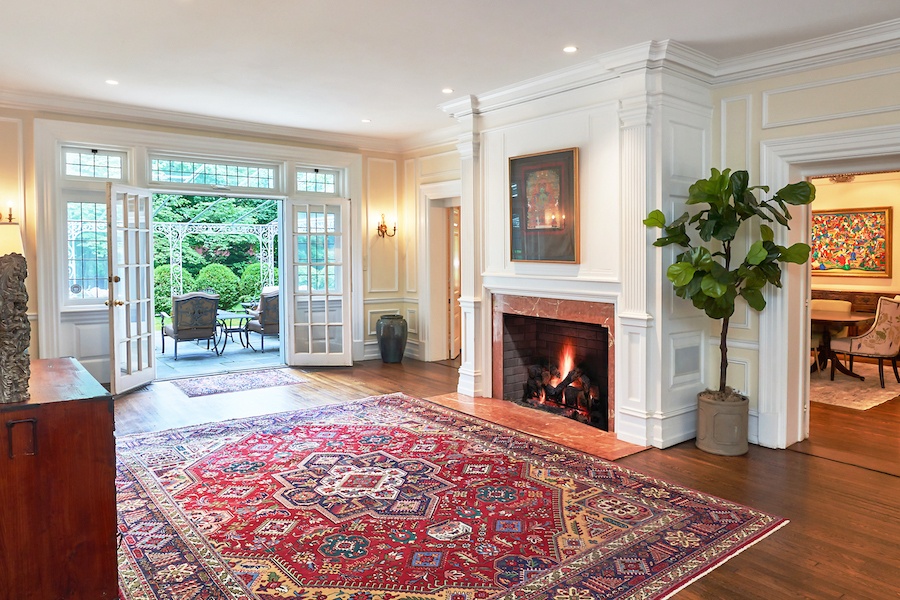 The same applies to the inside. The wide front door opens onto a foyer that spans the entire depth of the house — which, you will soon see, is ideally suited for entertaining on a grand scale. Its Mercer-tile fireplace and large French doors that open onto the rear terrace make this a great place to welcome guests to a house designed to accommodate many of them with ease.

But where’s the center staircase? Isn’t this a colonial? 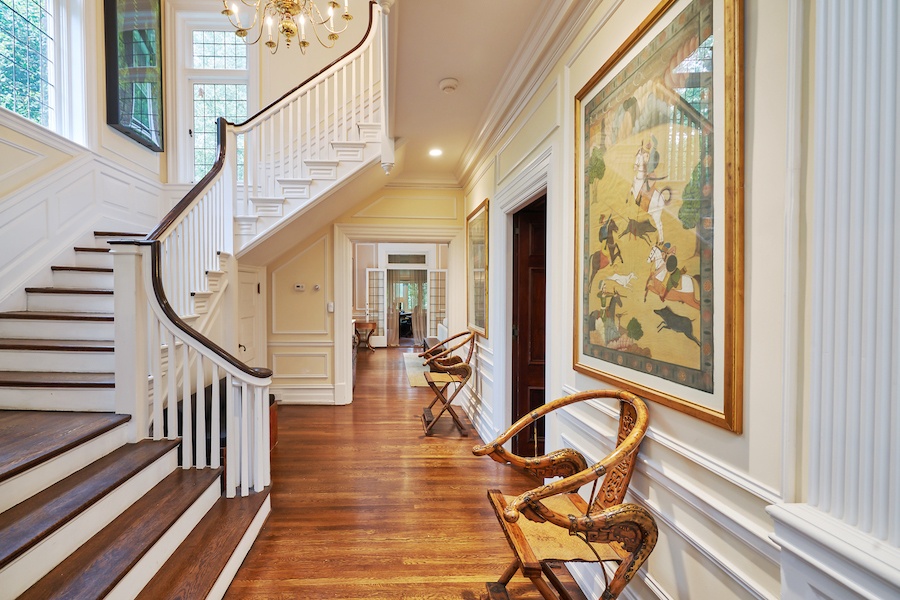 Sure. But it’s an off-center one. The staircase is located in that recessed wing just to the left of the front door. 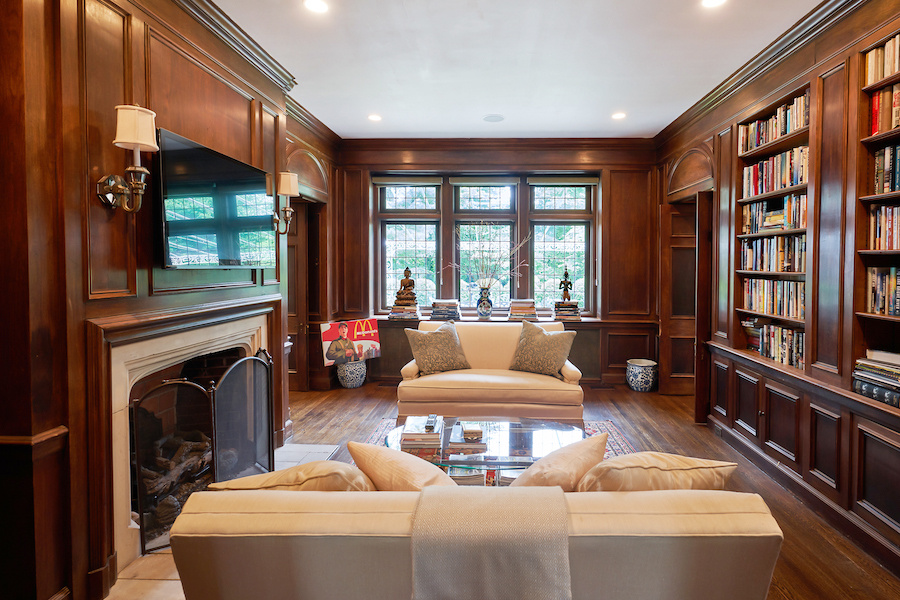 The next thing that’s off-center is the arrangement of the main-floor rooms. A traditional colonial puts the living room on one side of the foyer, with possibly a den or study behind it, and a dining room on the other, with the kitchen usually behind that. Instead, the main-floor rooms also span the house, one after the other. Or nearly span it, as the library off the foyer to the left sits next to the main staircase. Otherwise, it follows 19th- and 20th-century colonial tradition with its dark wood paneling and built-in bookcases. 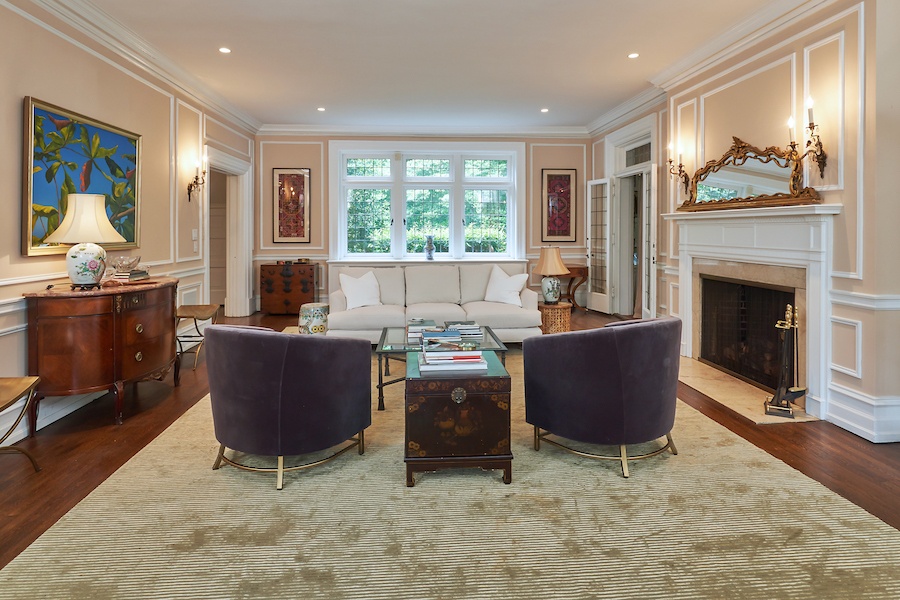 The large multi-segment windows at the back of the library also bring this colonial into the modern era. You will find those at both ends of the living room beyond the library. The one at the rear lights an alcove big enough to hold a grand piano. Yet the paneled walls and fireplace tie this room firmly to the past as well. 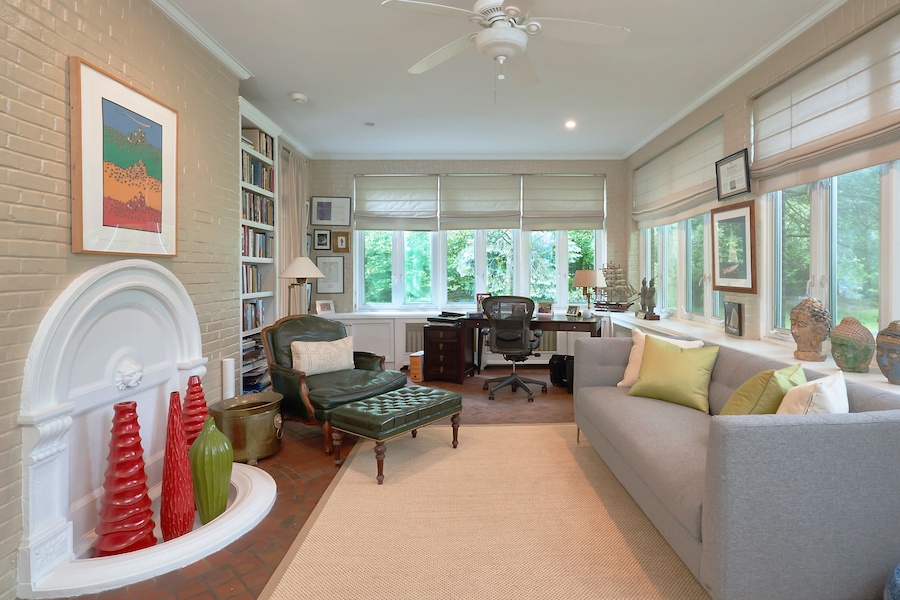 The sunroom beyond the living room has single-light segmented windows that give it an even more modern sensibility along with its simpler trim. 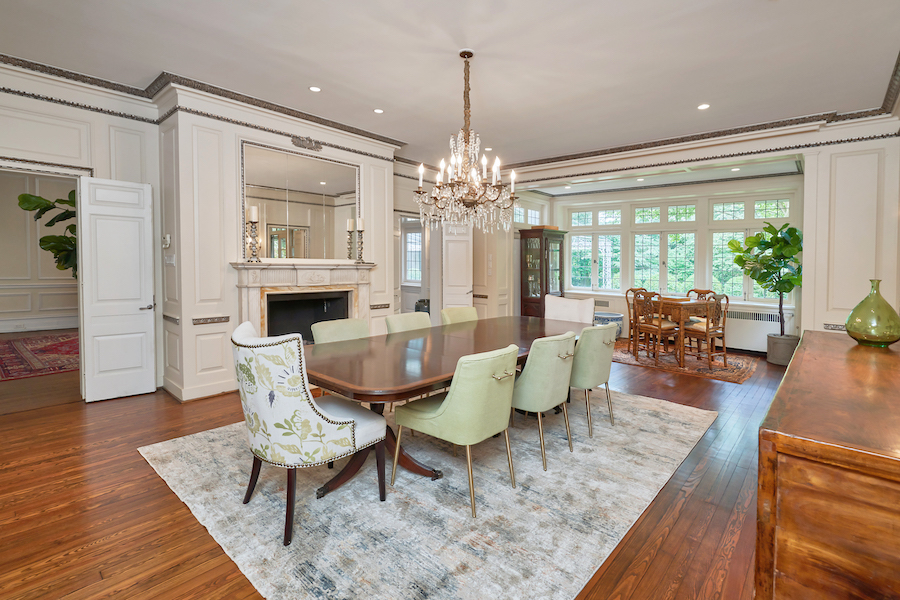 On the other side of the foyer, the dining room can accommodate a large main dining table. Its alcove can accommodate a second table for overflow guests, kids or games. The dark wood chair rail and accents on the crown molding also add a jazzy note to this classic space. 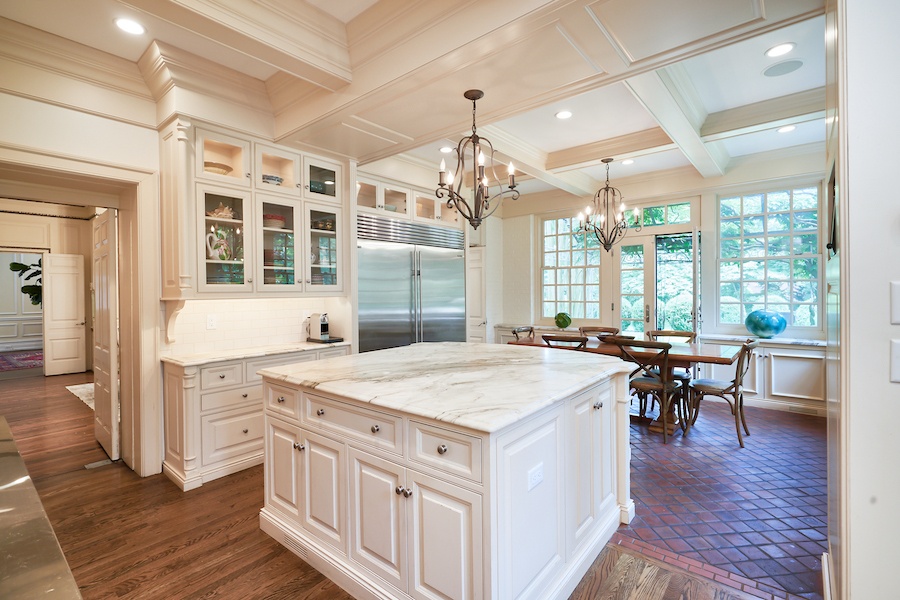 The more recently renovated eat-in kitchen has been upgraded to handle a large feast. 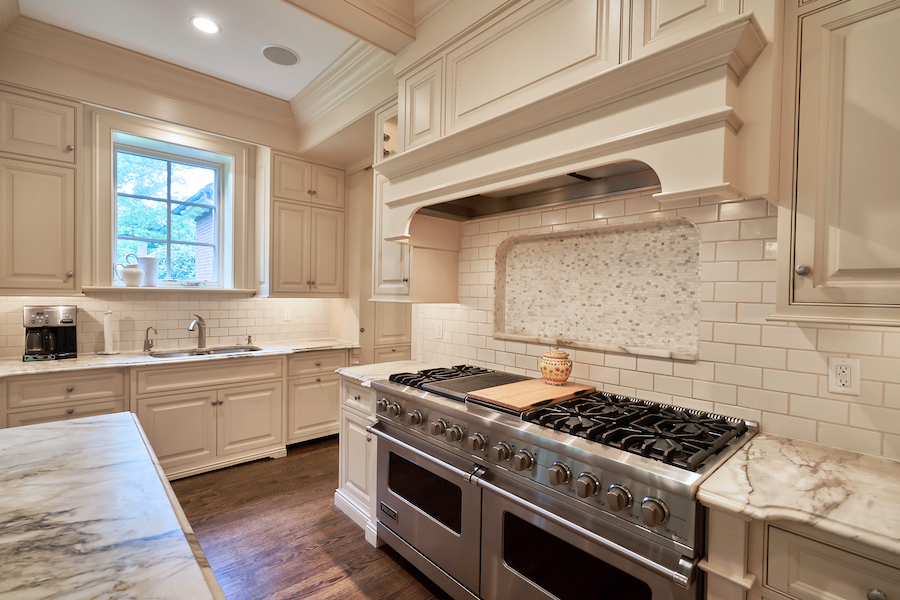 The food prep area features a Sub-Zero refrigerator-freezer and a commercial-quality six-burner range with two large ovens, a griddle and a grill under its removable butcher-block chopping block in its center. 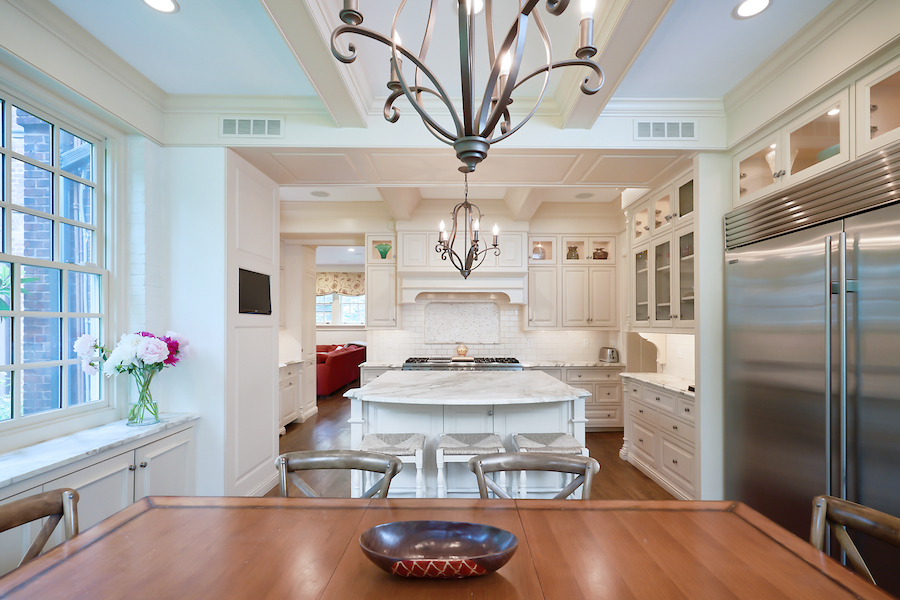 The large marble-topped island across from it offers even more prep space along with bar seating, and the sunny breakfast room beyond it has a terracotta tile floor and an excellent view of the rear terrace and backyard. 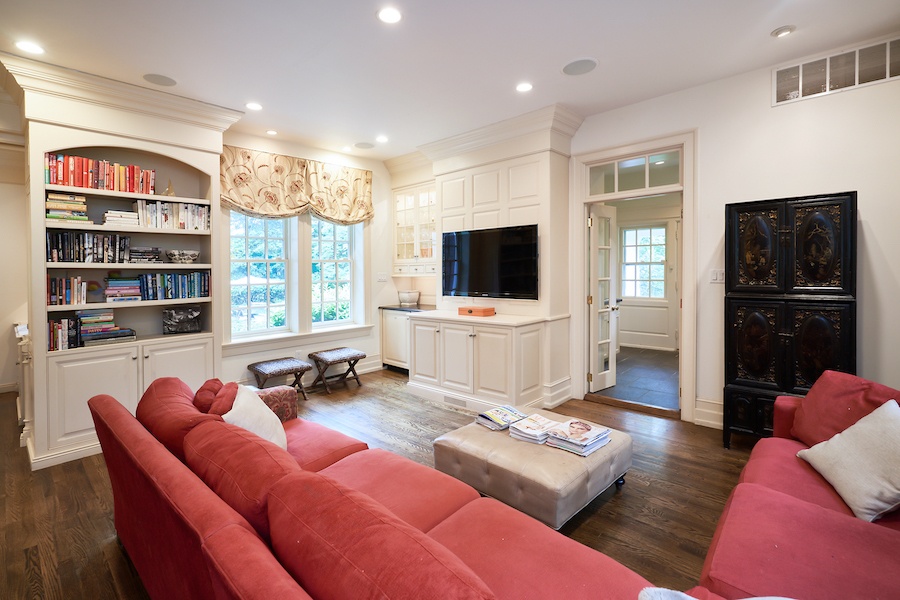 A more intimate family room lies on the other side of the kitchen from the dining room. Next to it you will find the pantry, an office, a mudroom and a full bathroom. 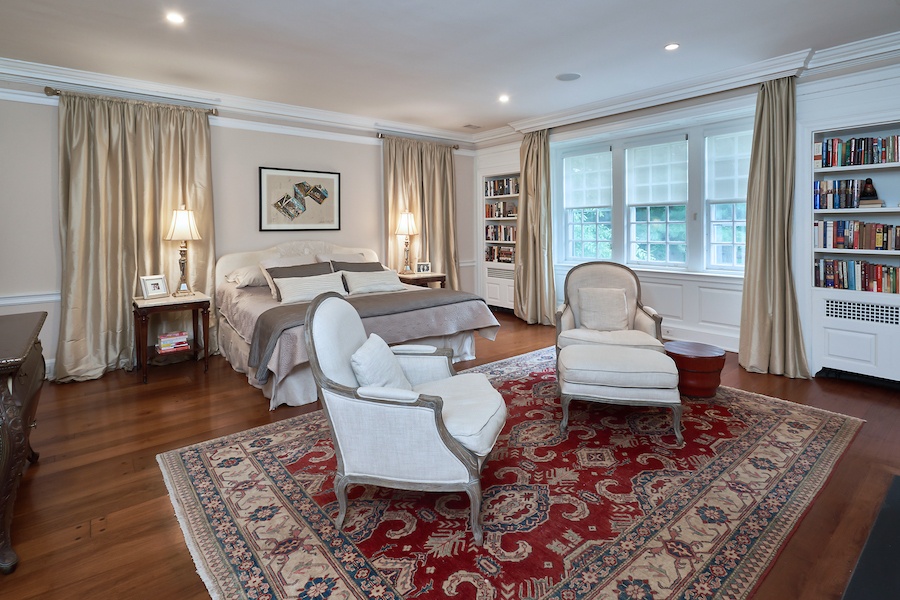 The second floor contains the primary bedroom suite, three more en-suite bedrooms and the laundry room. The primary suite has an exceptionally spacious bedroom that includes a seating area next to its fireplace. 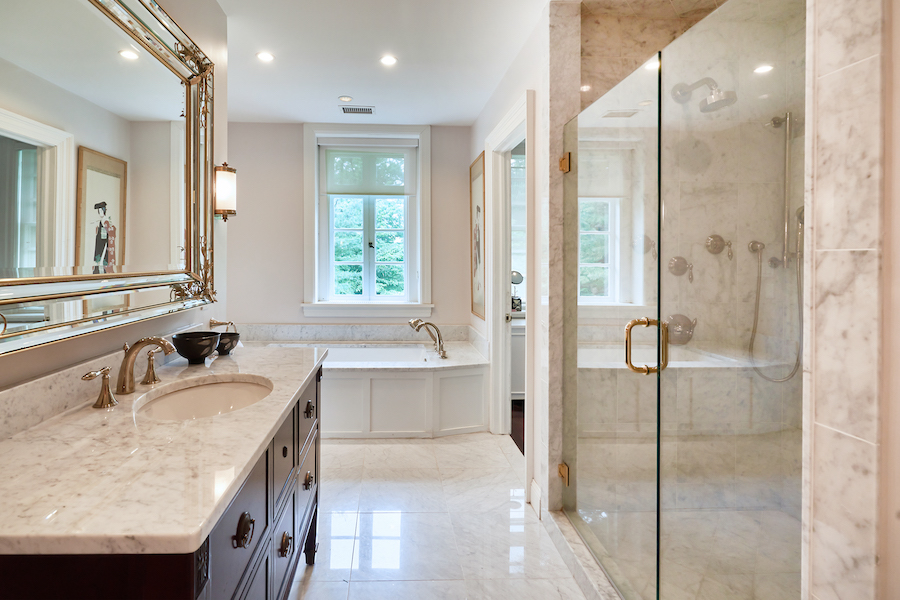 It also has two walk-in closets, one with a dressing area, and two fully outfitted bathrooms. 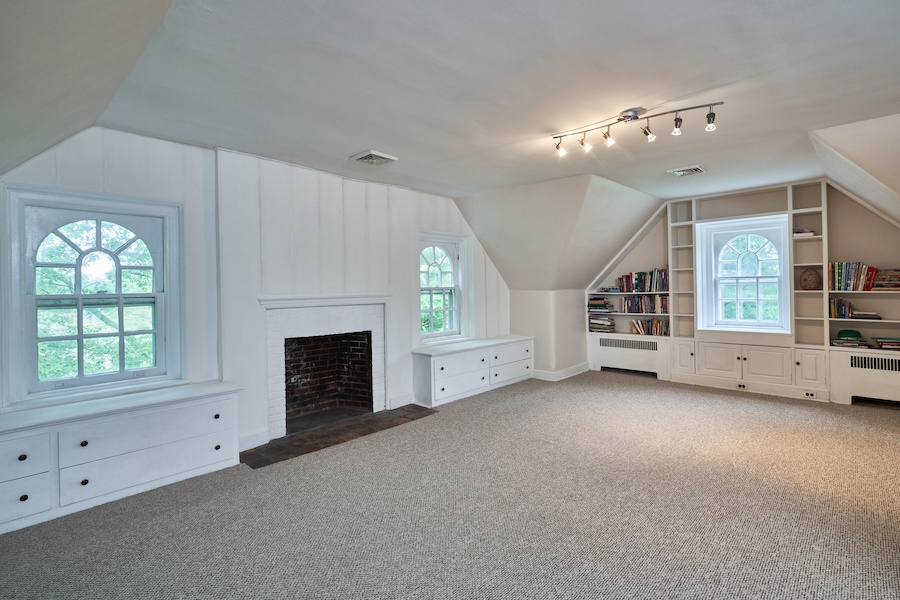 The bid solicitations Brockie placed for the initial design described the house as having “two and a half stories,” and the bid solicitation he placed after he went back to the drafting table described it as “two stories and attic high.” Despite its lower ceilings, however, that attic is now a fully finished third floor containing four rooms and two bathrooms. Three of those rooms, including the one above that looks more like a potential den, are classed as bedrooms. 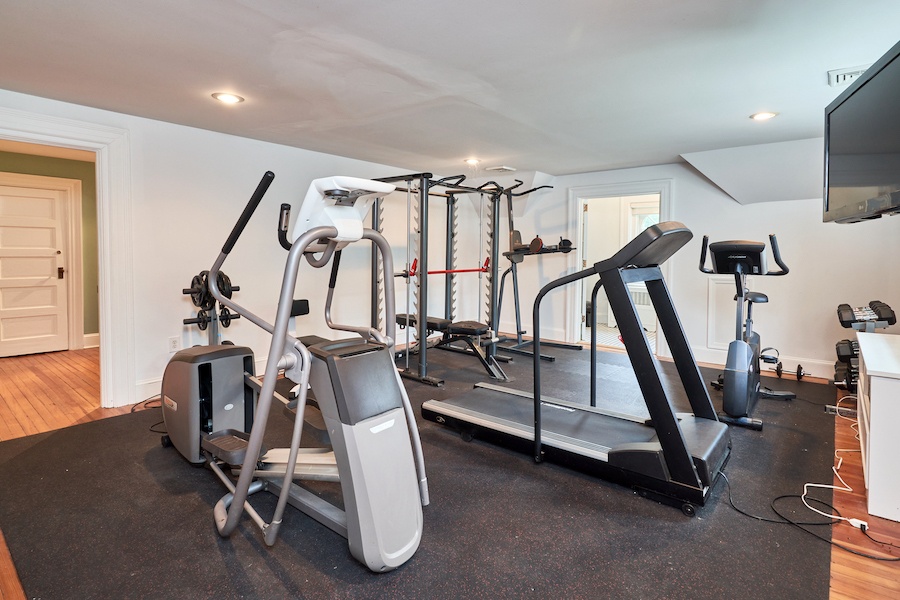 The fourth is a bonus room that now serves as a home gym. 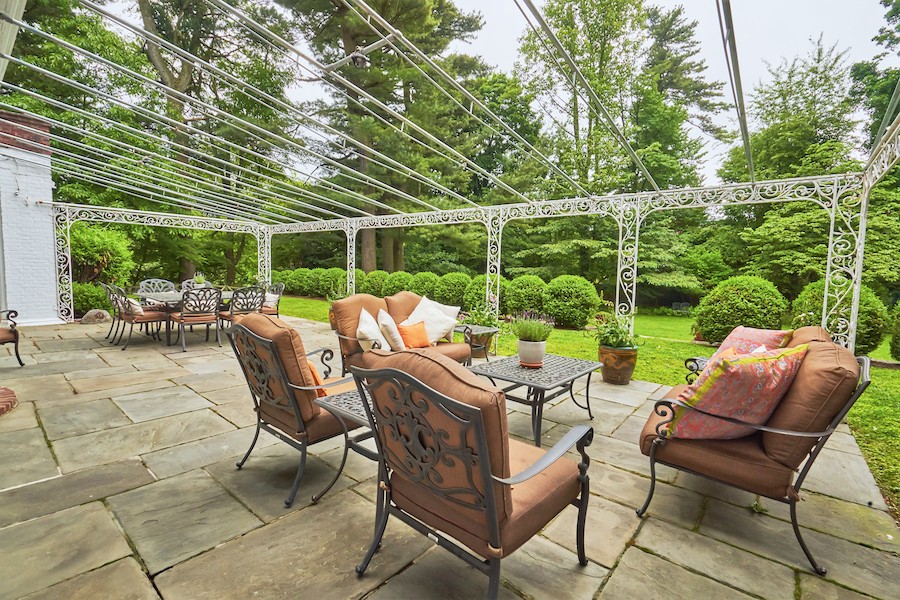 Behind it all is a huge outdoor space that can also accommodate many guests, starting with its expansive rear terrace. 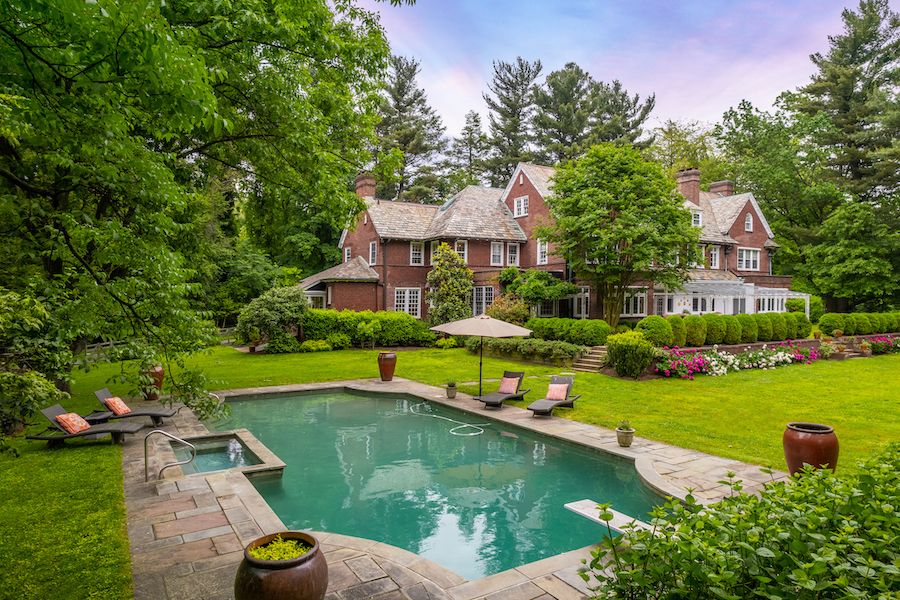 A few steps down from that terrace, a neatly manicured lawn spreads to the tree-lined back of this house’s lot. Off to one side sits the swimming pool. 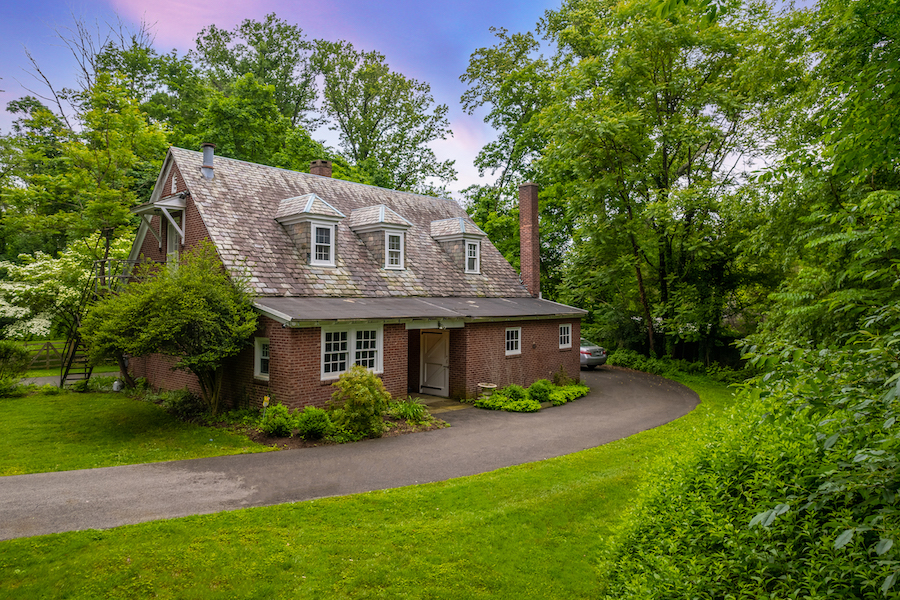 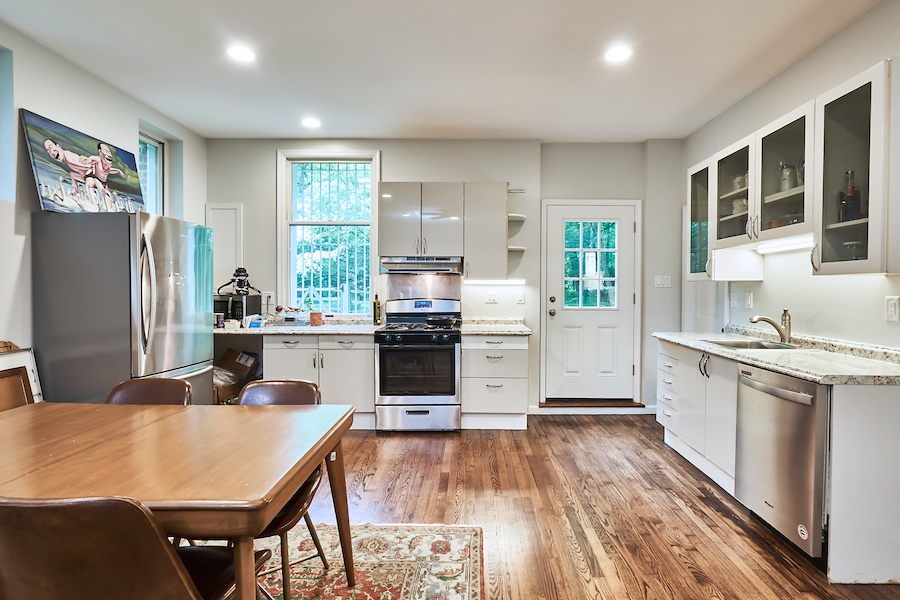 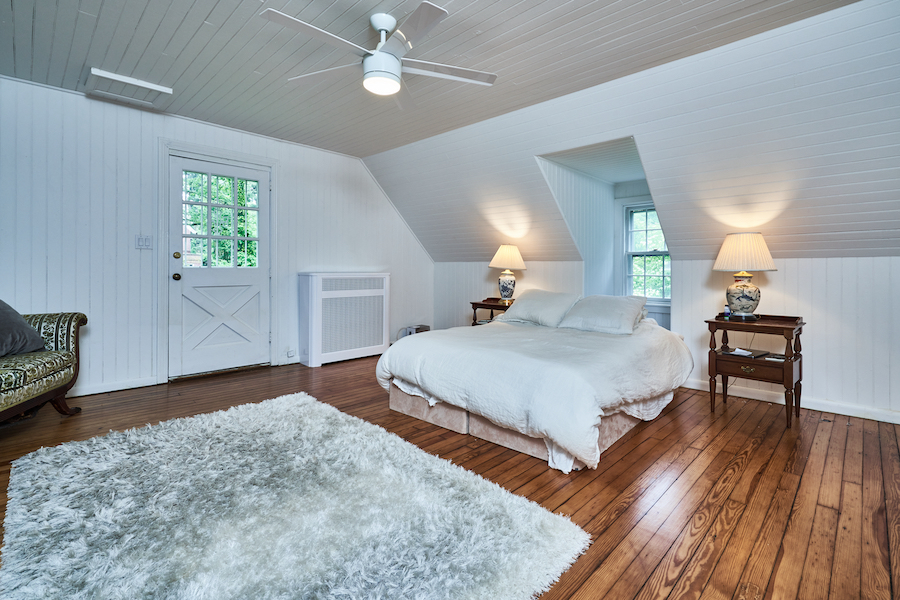 The property also includes a recently updated, two-bedroom, two-bath carriage house where you can put up your relatives and friends who want to stay a while.

According to the history of this house and of Chestnut Hill prepared for its previous owners in 1995, the lot on which this Chestnut Hill informal colonial house for sale sits bumps up against what was once Thomas Mill Road in back. One of several roads built in the 1700s to serve mills built along the banks of Wissahickon Creek, it became useless after the city incorporated the Wissahickon valley into Fairmount Park in 1870 and ordered the mills shut down. However, its former path is now a hiking trail that leads to the Thomas Mill Covered Bridge, the only covered bridge still standing in the city of Philadelphia.

Henry Howard Houston used the Wissahickon as a selling point when he built a branch of the Pennsylvania Railroad up this side of Chestnut Hill in the 1870s and turned it into the neighborhood’s more fashionable side. It remains a beloved amenity for residents of houses like this one. It’s also a pleasant walk from here to the very top of the hill, near the library and Chestnut Hill Hospital, for which Bockie also designed buildings. The hospital lies to the left when you get to Germantown Avenue; turn right to reach the Free Library branch, Top of the Hill shopping plaza and Chestnut Hill’s lively and sophisticated shopping and dining scene along Germantown Avenue.

This house has changed hands six times, getting tweaked and updated along the way, since the Harrises moved into it in 1905. And now this jazzed-up, off-center-hall, not-totally-traditional colonial is ready for the next owner who appreciates its balance, proportion and (syncopated) rhythm.