British designer Thomas Heatherwick has railed against the “characterless buildings” he believes dominate new urban developments and called for architecture with more “emotion” in a talk at Singapore Design Week. Photograph by DesignSingapore Council.

“I want to talk about streets with the new buildings on and the problem that we all know exists in our towns and cities around the world – that we’re increasingly surrounded by characterless buildings,” Heatherwick said.

“I believe we’re living through an epidemic of boringness. Everywhere is the same – dull, flat, shiny, straight, inhuman.”

“Most of the time, buildings leave us feeling indifferent”

Heatherwick made the remarks in the opening of a talk he gave yesterday at the Design Futures Symposium, which is part of Singapore Design Week.

In the talk, Heatherwick criticised modern buildings for being sterile and dull, calling for architecture that elicits a stronger emotional response.

“I’ve been told so many times that form should follow function, meaning that if I work out with my team how mechanically a building should go together that, somehow, the outcome will be great,” Heatherwick said.

“This mantra is a century old. And it sounds good, doesn’t it? Surely, any extra detail is just silly, unnecessary decoration. But I want to talk about the function that I believe is missing – the function of emotion,” he continued.

“And when I say emotion, I mean the ability of buildings to lift our spirits, to connect us together. We walk around buildings, we look up at them. And most of the time, they just leave us feeling indifferent.”

“What’s happened to all the lumps and bumps on buildings?”

According to Heatherwick, people are rarely drawn to contemporary architecture in the way that they are to older parts of towns and cities.

“Why? Because we all know that the new bit will be monotonous and boring. What’s happened to all the lumps and bumps on buildings, the shadows, the textures, the high points of light, how did it all become so monolithic and devoid of character?”

Heatherwick went on to argue that the indifference people feel towards modern buildings is a key factor in why so many are demolished and rebuilt, which generates huge amounts of unnecessary carbon emissions. The average commercial building is just 40 years old, he claimed.

“Wouldn’t it be better if those buildings inspired us to want to adapt and adjust and repair them?” he asked. “The evidence is clear that when people don’t love buildings, they’re more likely to demolish them.”

Heatherwick gave four examples of projects by his own studio, which he said aimed to be more “humanising”.

This included his Maggie’s Centre for cancer patients built on the grounds of St James’s University Hospital in Leeds.

“A key to our focus was the details and aspects that could humanise and make something feel that there was care and attention when typically the hospital environment is something that tells you that there isn’t really empathy and care,” Heatherwick said of the project.

He also showcased Little Island in New York City, a park and performance space built on 132 concrete columns set into the Hudson River off Manhattan.

“A year and a half ago, we finished this new park, which is pushed out off from the city so that you have the emotion of leaving something behind and arriving at something new,” he said of the project.

Other buildings Heatherwick highlighted included two of his studio’s projects in Singapore – the bee-hive-like Learning Hub at Nanyang Technology University and EDEN, a residential skyscraper in which each apartment features a balcony overflowing with plants. 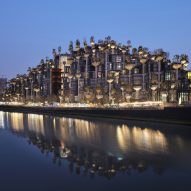 “We all need places that trigger a response” says Thomas Heatherwick

“I’m not saying there’s any one solution for this epidemic of boring,” Heatherwick said.

“Just like in nature, we’ve learned the immense importance of biodiversity. I believe we now desperately need more architectural diversity. My hope is that we could together trigger a new humanising movement that no longer tolerates soulless, inhuman spaces.”

Heatherwick was one of a host of speakers at the symposium, which was curatorially directed by Museum of Modern Ar (MoMA) curator Paola Antonelli and titled Agency for the Future: Design and the Quest for a Better World.

The symposium was one of the flagship events of Singapore Design Week, of which Dezeen is a media partner. Earlier this week, the organisers of the design week told Dezeen the event was “about putting Singapore out there on the world map”.